It was a sultry day in 2008. The October heat had set in. We were in the field taking a break under a small Teak tree, sipping on the little water left with us. The grass was tall and green but the characteristics of a deciduous forest were already showing. There was no wind – which is typical of October and the humidity was at its peak. We were downright exhausted and had decided to sit under the Teak which provided the only little shade around. We’re glad we chose that place, for we observed a very interesting behavior in the big world of little creatures.

I chose to sit in the grass where the area was dense enough for various critters to crawl around. I saw some movement in this undergrowth and for once thought it was a scorpion! I was super excited, a scorpion sharing the shade with us! After a few glimpses of this ground-walking animal, I saw that it was a wasp carrying a huge caterpillar in its mandibles – the prey was double its size and must have weighed more than the wasp itself.
That very moment I forgot how exhausted I was, how the sun charred my skin and how my throat screamed for water. I took some shots of her walking in a considerably straight line – towards god knows what. The story breaks here.

Let’s have a look at this insect first. It was a wasp, a Hymenopteran. It was carrying a caterpillar in its mandibles, hence a predatory wasp. It had a slender abdomen – much like the thread-waist wasps so it could belong to Sphecidae. The caterpillar was 8 cm in length. It was a semi-looper caterpillar and hence belonged to the moths. I suspect it belonged to Catocalinae – a diverse family of moths, most of which are termed Fruit Piercing Moths that act as pests. Now we have a closely identified wasp, but are unsure if it’s a Mud-dauber or a Digger. We will find that out soon. But we know who the unlucky prey was.

The story commences. So there is this wasp carrying a big caterpillar – walking all the way downhill on a hot October day. That’s some stamina alright. I can only speculate how she captured the prey. Finding such a big caterpillar would not have been difficult since these predatory wasps are experts in finding and capturing prey. What’s surprising is how she managed to lift it and walk all the way here. I emphasize on “walk” because that’s how I saw her at first. She was walking – she perhaps could have been flying before – but considering the bulk of the prey I am not very positive whether she could fly or not. Now the way was close to 10 feet – long distance for a two inch wasp.
She made her way through the thickets and often disappeared into the fallen leaves – appearing once in a while. She was non-stop on her trek, did not wait unless something blocked her way and she stuck to her near linear line-of-walk. I can only imagine how she managed to do that. But let’s answer that later.

Where she headed was still a mystery until my friend spotted a little hole in the ground. Yes! A hole in the ground, yes, it is a solitary Digger Wasp. There are three Subfamilies Sphecinae (Digger wasps), Sceliphrinae (mud-dauber wasps) and Ammophilinae. This particular wasp belongs to the last Subfamily, in the genus Ammophila.
In summary, the Digger Wasps sting their prey – which can be a cricket, a grasshopper, and any other insect, paralyze it and carry it along to the nest – a burrow. The wasp collects enough prey and stacks it into the nest, and then lays eggs. But some species of solitary wasps stack only one prey and lay a single egg. The prey is only paralyzed hence is alive, and as soon as the grubs hatch, the food is served fresh.

This is the sole reason why I decided to title this post as “Mother Wasp”. We often think that only higher animals show motherly care towards their young ones; and forget how hard working these little animals are towards a successful progeny of theirs. This care for the young ones is seen in many insect groups, from social ants, bees and wasps to solitary ones including hemipteran bugs, beetles and flies. It is true that all the “motherly” behavior is inbuilt in their genes, but let’s not forget – it is inbuilt in our genes too but ours is also affected by the environment we live in.

The story resumes. After a long walk through the thickets, the she-wasp was near her destination. This is when I started to wonder, how in this big world did she find her way in? I mentioned she walked in a strict straight line. Had she been flying, she could have easily seen the burrow through some landmark – for instance, the teak tree. Here she was walking with a burden and reaching the target without any effort of searching around for it. She must have used the mid-day sun to navigate. Many insects do it such as bees and ants. But this behavior of using the sun to navigate makes me wonder about a lot of other things.
The story pauses here. Let’s assume she used sun to navigate. Her nest was downhill (on a slope), and the sky was clear. The nest was below a shady tree but was easy to spot. All of this tells me that this wasp is diurnal, which is obvious, but it also gives me an idea of the time when she hunts. It is possible for such a wasp to navigate on ground or in air with the help of sun as the compass. But here I assume that navigating through the thickets during mid-day is easier than at dawn or dusk. I wonder if they have specific times for hunting.

The story resumes. The wasp carried the paralyzed prey and set it beside the nest. She went inside the burrow to inspect it – she spent about 30 seconds inside the nest, throwing out little stones. I stooped over, without disturbing her and photographed whatever movements she made.
She inspected the burrow a several times, often getting some soil off the nest.
An interesting observation by Daniel Dennett showed that – when the wasp drops the prey beside the burrow and goes inside to investigate it, and if the prey moves (or is moved), the wasp does locate it, brings it back, drops it beside the burrow and goes inside to investigate again. Every time the prey moves, the wasp does the same act. This mechanical behavior is how he describes as an example of “how seemingly thoughtful behavior can actually be quiet mindless, the opposite of freewill (that is Antisphexishness)". For a more elaborate read – visit HERE.

After inspecting the burrow – possibly adjusting the stack that is already stored inside and clearing tiny stones from the nest site – the wasp grabbed the prey and receded inside the burrow. This did not take very long, and within a few seconds, the large prey was well inside the nest. I am unsure if she laid the eggs before the caterpillar was taken in or after – since she appeared outside very quickly, but I assume she laid one egg each on the paralyzed prey inside. 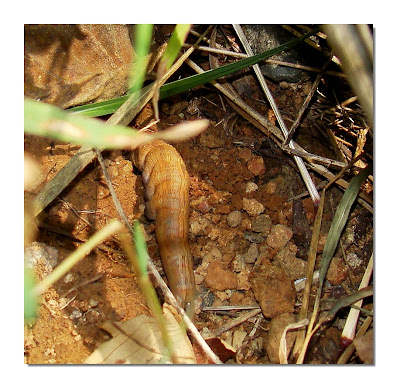 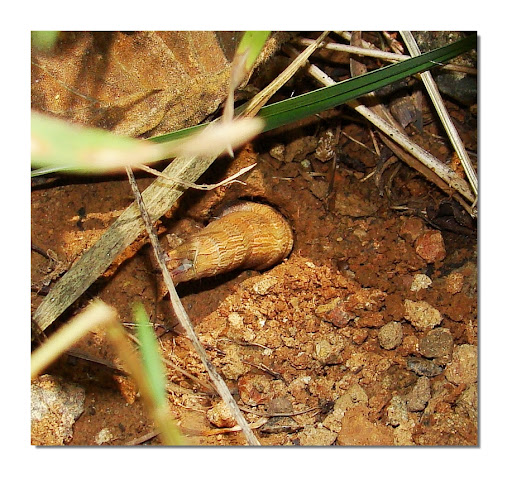 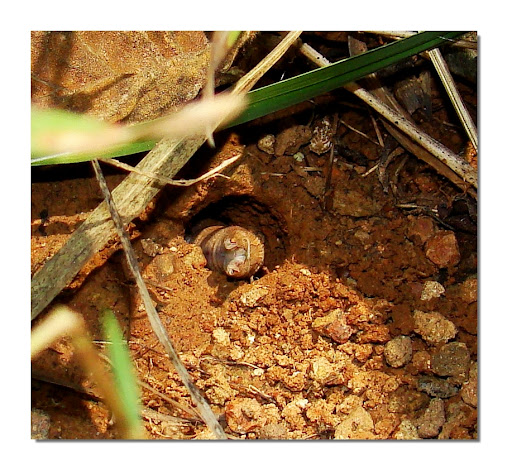 Now was the time to cover the nest. The wasp came out after a couple of minutes and started burying the nest. This task was not something very random, but she put in just as much effort in burying the nest as she must have in making one.
The wasp carefully shifted only the soft soil into the burrow and occasionally separated large soil particles off the nest entrance. The work was exhaustive and she took several turns to clear the large particles by her mandibles and then turning her back towards the entrance, she would shove soil onto the entrance by her hind appendages. She repeated the steps several times until she was satisfied by the quality of soil on top of her nest. The larger particles (stones, really) were carried in the mandibles – which she did not throw aside but preferred to fly a feet from the nest and drop it. This peculiar behavior also interests me, and I haven’t come across a reason why she chose to throw it well away from the nest. Perhaps because it might fall over the nest again - another genetically inbuilt behavior?
Following are a few more sequences of her laborous work to cover the nest. 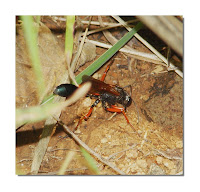 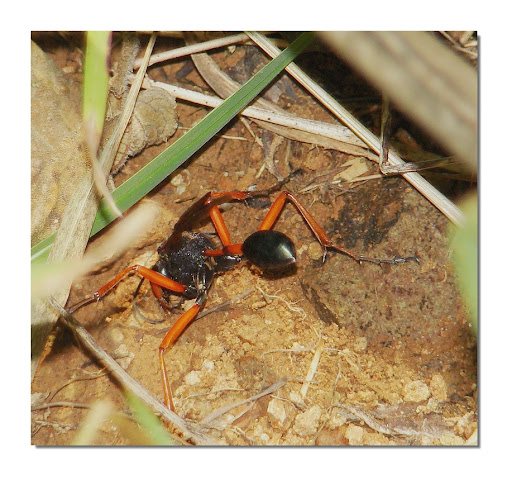 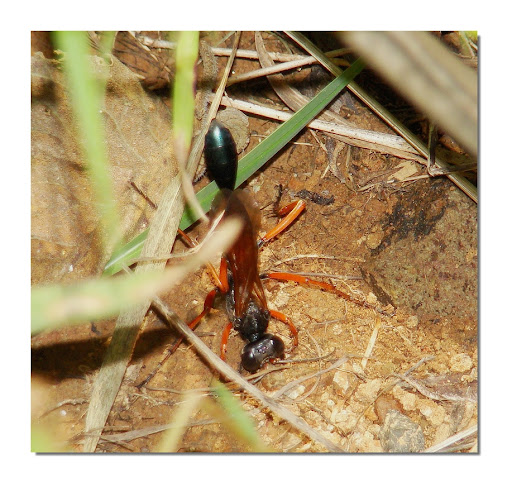 After all the taxing work of a mother, which took several minutes, and after standing in the mid-day sun, bending over and making absolutely no movements – the nest-site looked perfectly neat and clean. It’s as if there was no burrow at all. The task was over. The grubs had enough food to eat. Her motherly duty was completed – she laid eggs, provided food and provided protection. The wasp flew away, never to return.
This little natural history has been followed and studied for years. The millions of years of evolution have made these little creatures masters of their skills. I had seen another wasp carry a katydid and fly to her nest in a hurry in the same area. They are there all around us, doing their daily job of looking after their young ones, making sure their species survives. It may seem very mechanical, the way they behave, the way things are, but they are not living without benefiting the ecosystem. They have a purpose that is not mechanical.

In case of the Digger Wasp, they are predatory as we know it and prey on pest populations such as crickets, katydids, grasshoppers and caterpillars. Thus they not only protect a certain plant from being eaten, but also keep their population under control and act as natural pest controllers in agricultural fields.

Thank you for reading.


Recommended:
1. Observations on the Nesting Behavior of the Digger Wasps of the Genus Ammophila by Howard E. Evans
The paper discusses the Ammophila genus in detail along with detailed information on how the wasps carry their prey, the nest size and other observations. A must read if you read this blog article.
2. The Evolution of Prey-carrying mechanisms in Wasps by Howard E. Evans
An in-depth look into the elaborate behavior patterns of Wasps, their ancestry, mandibular and pedal mechanisms.
3. Human Sphexishness: Why We Make the Same Mistakes Over and Over Again by Christopher von Bulow
aniruddha dhamorikar best of 2010 digger wasp india sanjay gandhi national park sphecidae