Showing posts from March, 2012
Show all

The Lizard that Lost its Way

Aniruddha Dhamorikar March 17, 2012
I waded through a waist-deep road-turned-river – its flow steady but turbulent – and touched dry ground just before the city came to a standstill. On the way I glanced at a Checkered Keelback, ( Xenochrophis piscator ) a water snake, peering out of a hole in the wall. While others became homeless, he was home. He is one of the secret residents of the concrete jungles disconnected from the lush greens of the forests. His domain is the many interconnected gutters that line the concrete trees – apartment buildings that replaced woods out of a man’s wish. And here he hunts, eats, and breeds in this man-made habitat. Today was his day, because the floods flushed out mice that reside in the deep and dark places of the underworld. But many lost their lives, and many lost their way, without knowing how to get back home. In 2005 a torrential rain drenched and swept everything in its path– trees, cars, people and their houses, misplacing some far from their homes. There was chaos in t
5 comments
Read more 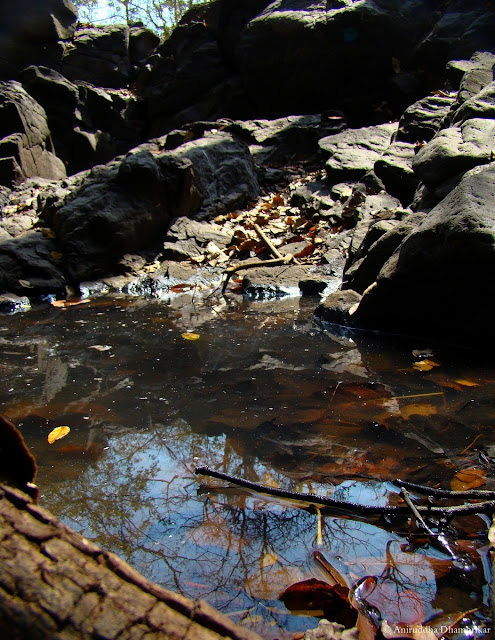 It dances through the day, full of impressions and impulses, empty of thought or care. Something moving near it casts a shadow on its sight, and it darts away without knowing why, startled but not frightened. A rival passes and it dashes at him, powerless to hurt, but bursting with nervous energy which must find an outlet, and the two in mock combat mount up into the sky until they are lost to sight. – EHA, The Naturalist on the Prowl The month of February is drier than January but wetter than March, and much more bearable than the searing May. In the forests of the Sahyadri, rivers shrivel to a trickle or stagnate in small puddles. Streams burry into the ground and lakes shrink to their halves, and slowly they all expose their moistened shores and damp beds. These ecotones, lasting for over two months, serve as an important ecosystem for a myriad of life-forms. It is a place of a gathering for animals large and small, as they home in to relish this ephemeral reserve at their stipulat
1 comment
Read more
More posts