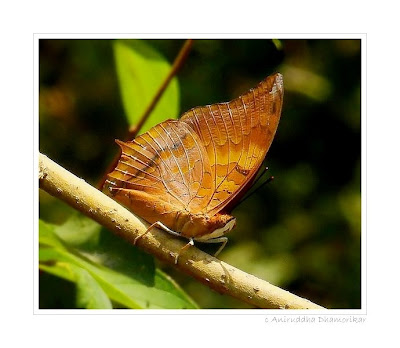 The Charaxinae
The Killer Moth or Charaxes of Batman may be a villain that everyone hates. But that does not stop the butterflies I’m in love with – commonly called Leafwings be named the Charaxes (Subfamily Charaxinae).

Introducing the Nawab (Polyura athamas) and the Rajahs (Charaxes solon and Charaxes bernardus) from my backyard, who happen to be rather uncommon – if not rare – in the habitat that surrounds us.
There are around 400 species of Leafwings most of which found in tropics. India has about 16 sp. belonging to subfamily Charaxinae, family Nymphalidae. These butterflies are well known for their robust bodies, fast flight and cryptic designs. The habit of fast flight is developed to evade predators such as birds.
All Charaxinae exhibit other similar characteristics apart from morphological adaptations. The common food source for most larvae is dicotyledonous plants. The adults frequent wet rocks, dung, animal scat and rotting fruits rather than flowers unlike other butterflies to drink the liquid food.
The larvae of Charaxes show a typical “head capsule” that are four divergent curved fleshy processes which gives them a “crown” like appearance. The larvae are also known to make “larval beds” to rest on it during night hours.


Common Nawab
This robust butterfly prefers high canopy, but often visits the ground for food which happens to be the best way to observe it. Eggs are laid on Fabaceae plants, Acasia caesia, Adenanthera pavonina, Caecalpenia sp., Pithecellobian dulces etc. It is commonly seen at SGNP, specifically Nagla Block part of SGNP.

A tawny colored butterfly, considered to be one of the fastest of them all. It is yet another canopy butterfly, often visiting the ground for food. The larval food plant is Aglaia lawii. The best place to see it is again at SGNP, Nagla Block.


Black Rajah
A cryptic butterfly, Black Rajah is one of the favorites of Butterfly watchers. It is generally a low-altitude butterfly, commonly seen feeding on the secretions of rotting fruits and animal scat. The larvae feed on Tamarindus indica and other Fabaceae plants. Best place to observe them is at Mahim Nature Park Society.

All of the Charaxinae butterflies are considered uncommon, and most rare. This status is given to them for they are scarcely seen around. A better way to protect these is by keeping-your-garbage-with-you that is, by not littering the parks (National Parks included!). Planting the larval food plants – which are all ecologically important as well as wild – in your backyard may invite these in your backyards for there are records of the larvae seen feeding in suburbs too.
aniruddha h d black rajah charaxinae common nawab india sgnp nagla block tawny rajah