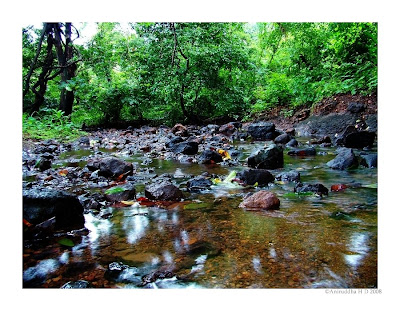 Yeoor Hills
BNHS had organized a trail to Yeoor Hills, lead by Isaac Kehimkar, Yuvraj Gurjar and Dr. Amol Patwardhan. We had an ‘official’ letter to be inside the protected area of the Yeoor Hills, and that’s something great! About 50 on and off BNHS members trailed through the green laden hills, scanning the undergrowth and the canopy. The trail was unusual in itself for we found exclusive monsoon species here and there.
For more on BNHS, visit here – http://www.bnhs.org/
The trail started at the entrance gate into the actual SGNP area, and as soon as it started, we were greeted by the cold humid air with promises none like anything ever witnessed! 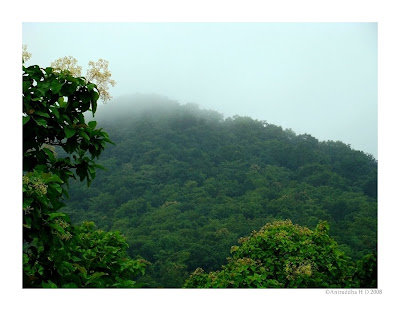 To start off with, the flowers are blooming as usual, and so is the Karvi! 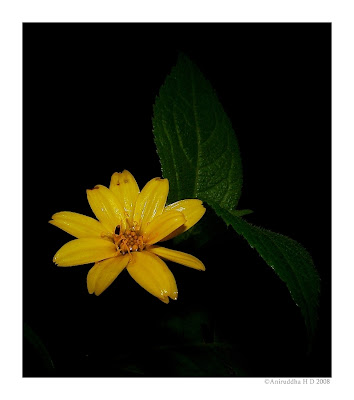 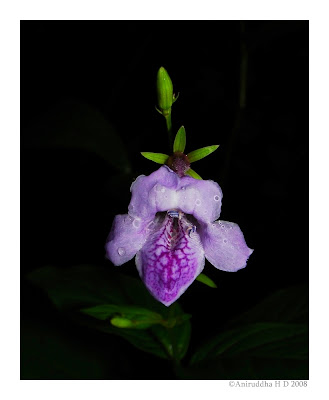 Although these common flowers adorned the forest floor, so did the Karvi, that blooms once in every seven years! 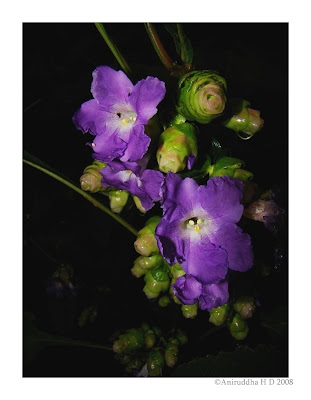 And the sugary treat that is so rare is enjoyed by many, like this fly in the following photograph... The butterflies were commonly seen everywhere. With less and less of the Lycaenids, I again looked out for the Hesperiids, and was lucky enough to see a few of them. Although no Pyrginae, we saw a Brown Awl, Grass Demon, Rice Swift and Chestnut Bob. 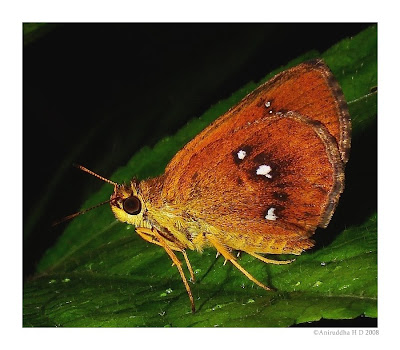 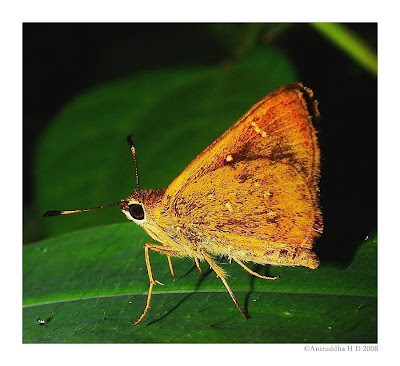 Vindhyan Bob
The above two pictures of different Bobs - the above one being the genuine Chestnut Bob, while the latter one shows remarkable difference. Is it a Vindhyan Bob?

An Update: I had an e-mail conversation with Krushnamegh Kunte, and he has confirmed this one to be a Vindhyan Bob. It is a native bob to India. It is known to have various seasonal forms, as well as intermediate forms which makes this one quite difficult to identify, however, it can be done so by observing it's upperwings. I'm posting another image of the same below. 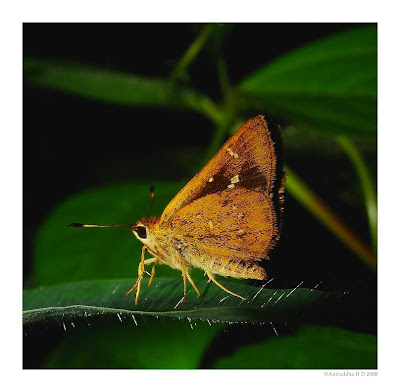 The Rice Swift, seen below, was seen nectaring on Karvi. Something you get to see once in seven years! 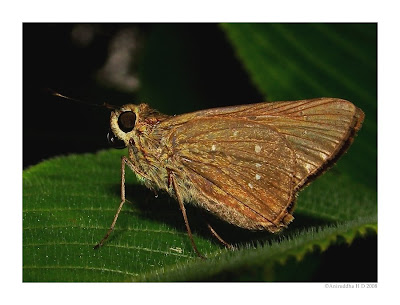 Rice Swift
And ultimately, presenting a Grass Demon in its most unusual pose!! 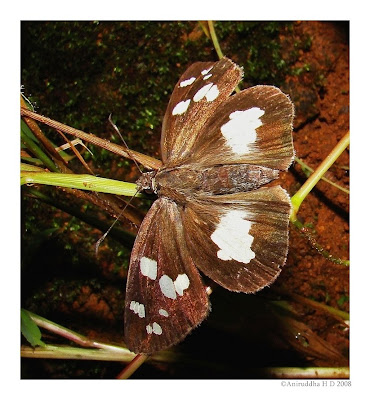 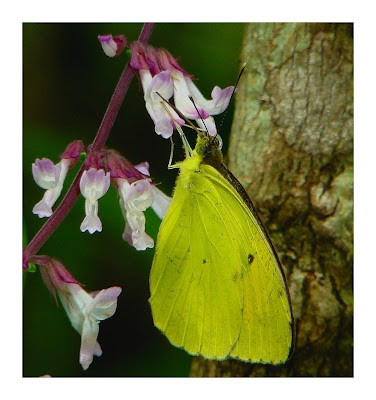 Yellow Orange Tip, male
Lastly on the butterfly front is a Bushbrown, most probably a Long Branded Bushbrown - underwings. See the Yeoor Hills 19th August 2008 report for the upperwing photograph. 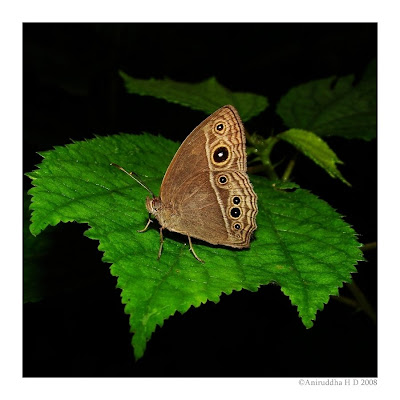 Bushbrown
We also saw various moth caterpillars, some in clusters for protection, while some really big and hairy... 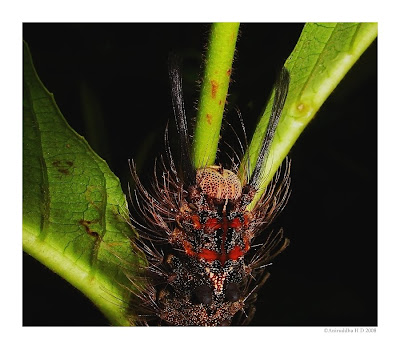 ...and a Grub that of a certain beetle too! 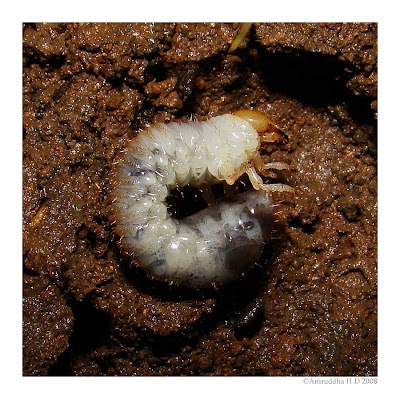 There were other many, many variety of insects. Like these grasshoppers seen below. Most of them were Nymphs and thats what monsoon is about - the young ones! 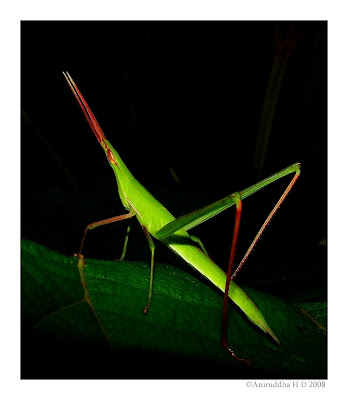 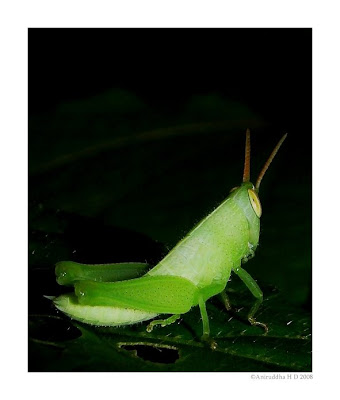 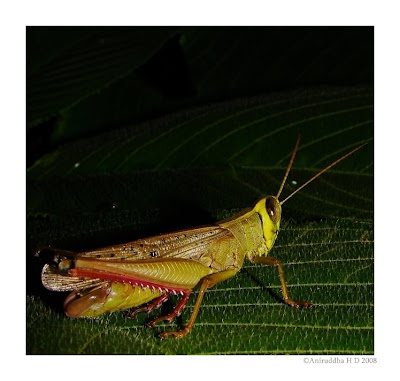 Adult Grasshopper
There were these, subtle kinds of peace loving insects, and others, of another kind... the predators - insects and arachnids alike.

Below is a Praying Mantis sitting on the flowers of Lea. Although not well camouflaged, it was sure to get its food some or the other time! 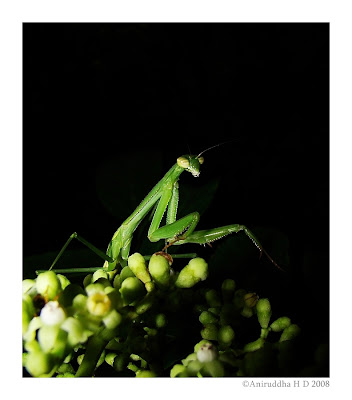 The other Praying Mantis that mimics a stick, stood tall in fame on a grassblade... 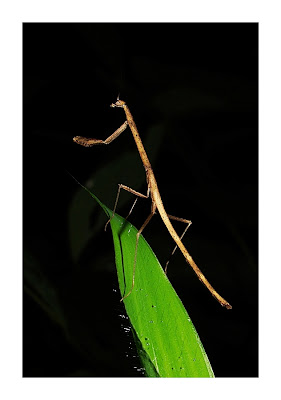 Stick mimicking Praying Mantis
Again, both of these were nymphs!

The other predators of the macro world, the Arachnids, specifically Spiders were omnipresent on all plants and the forest floor.

Seen below is a Lynx Spider that got lucky to suck on the Honey Bee juice! 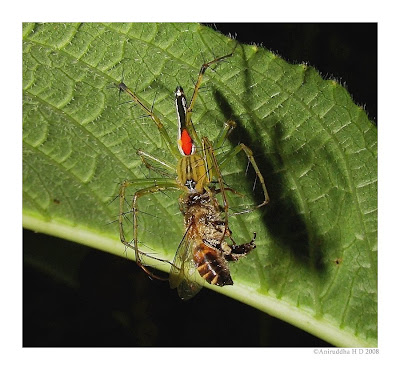 ...and another sitting on the inflorescence, awaiting a winged prey... 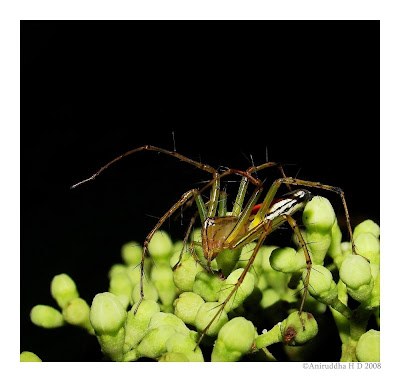 Lynx Spider
PS. This species is different than the ones seen in previous Yeoor Reports.
We were also lucky to see one Nursery Web Spider (Pissuaridae) sitting on forest floor awaiting a prey. They are ambush predators, often startling their prey. Although look-alikes of Wolf Spider, they are different, more related to the Water Spiders. 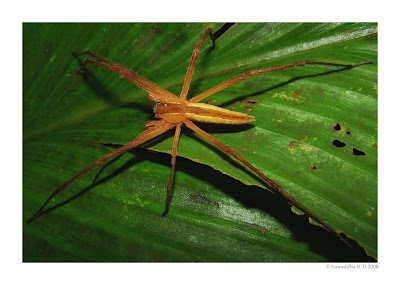 
When it became pretty dark, we were fortunate enough to have seen this prefectly camouflaged Giant Crab Spider. Although not a relative of the colourful Crab Spiders, these one's pose like a crab, hence called Crab Spiders too, and due to their giant size the name. 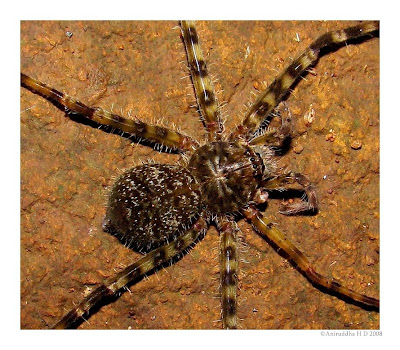 
Last but not the least. The top most predator on the list today, we saw a Bronze Back Tree Snake! It was a treat to see this juvenile snake. Thanks to Yuvraj for the excellent find!
Some photogallery of the Bronze Back... 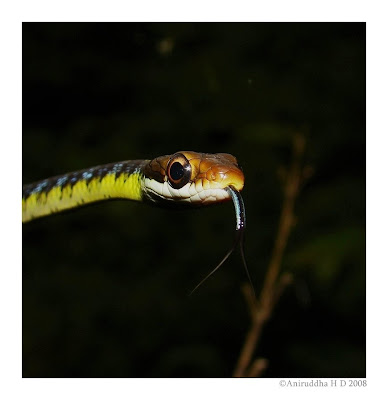 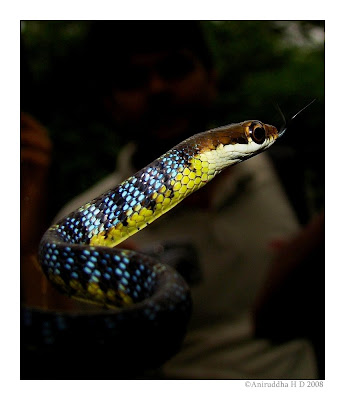 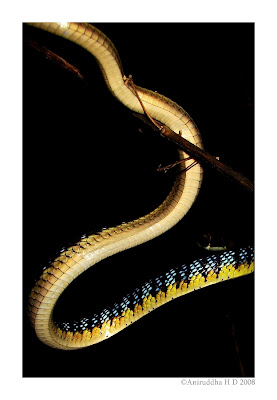 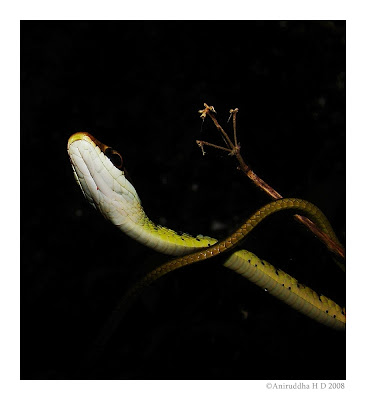 This little juvenile posed nicely for us, although he was intimidated with the people all around him, all he did was get the hell out of there!

None the less, he did find his way back upto the tree for some gecko hunting.

The trail was beautiful as always, and this proves how rich the floral and faunal life at Yeoor Hills is. Hats off! 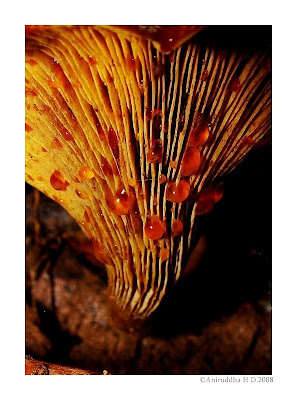