Aniruddha Dhamorikar December 10, 2018
I spent most of the year exploring Bandhavgarh Tiger Reserve, more-so for the tigers than any other animal, and while the alarm calls of chital and sambar, and the occasional roars and growls of tiger still echo in my ears (thanks so much to my colleague’s ringtone), I witnessed a place that is much more than just about tigers. There are also ants here – yes, ants – I stumbled upon a trap-jaw ant (Anochetus cf madaraszi), a first for central India and a new record for Madhya Pradesh while I was contemplating a few seconds before deploying the last camera trap one summer evening, and observed one of the most adorable behaviour among the ant Brachyponera cf luteipes of tandem-carrying, where a fellow sister-worker carries her companion in her jaws to the site of food – a second for India after I saw it first in Valparai. Fascinating what all is hidden or happens beneath the feet of tigers. I lost count of how many tigers I saw on how-many-an-occasion – yes, tigers are more common here than ants, but I was able to participate in one of the successful tiger reintroduction programme to Nauradehi Wildlife Sanctuary – of which I have written in Sanctuary Asia’s latest book ‘Wild Madhya Pradesh’; witnessed a tiger dubbed a man-eater and saw her life fade away; was among the first to witness the coming of the wild elephants to Bandhavgarh Tiger Reserve after over a century or more.
Other than writing a poem on bird song, I could barely spare any time to reflect on my experiences in Bandhavgarh – but I mustered some words to write a chronicle, if you will, of Bandhavgarh, and I present it as a token of love for the land, of gratitude to the people, and of remembrance for a place where my feet slowly sank in, in the form of poetry (presented with respect to the Field Director and dedicated to the front-line staff of Bandhavgarh Tiger Reserve) – an ode to the mountain fort. 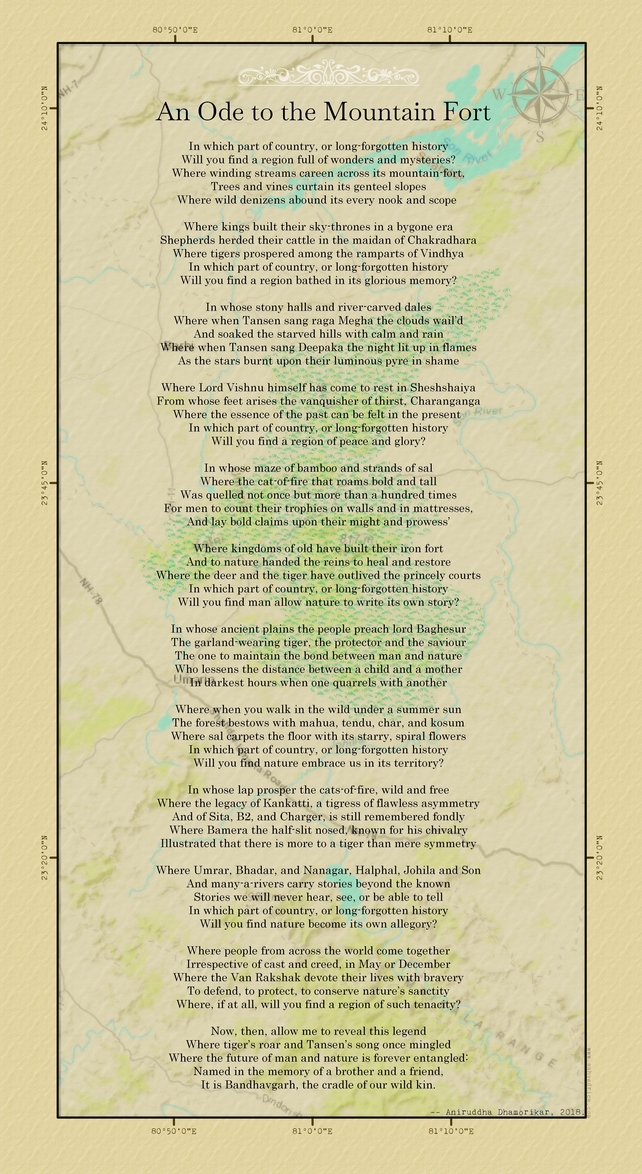 As I move on from this year to the next, I will be getting further engrossed in the web I’ve spun around me, deeper still to explore where “the strongest trees are rooted in the dark places of the earth” (nothing sinister, this is only a quote from the three-eyed crow). In other words, I will be a little more inactive on Sahyadrica as I join the pieces of central India’s rich natural and cultural history. I hope to find my way back to update on what nature does around us, or rather what we do around nature.