A Walk by the River 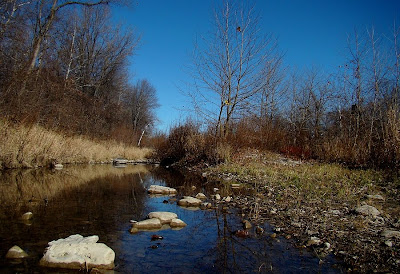 A cold breeze swept across the street and hushed the rustling leaves in the corners. Fall neared its end, and the breeze cleared the way for winter. It was a fine day, as the sun warmed the earth’s surface and the bright blue color spilled across a cloudless sky. What a day to explore, thought I.
It had been months since I went on a proper nature-walk, so I did not want to miss the opportunity and the fantastic weather. I went to the Thames River watershed, a beautiful place to explore some fauna. Although the season was not right, I did come across some hardy species that could withstand the near zero temperatures. My wish was to capture everything I could, and learn more about the North American flora and fauna, but the White-tailed Deer, although common, topped my wish list! 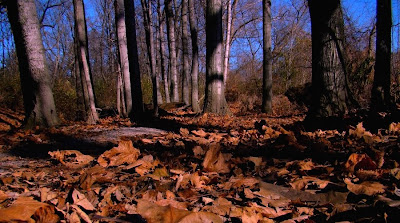 The landscape was dry for most part and I walked on a thick blanket of golden brown leaves, covering every part of the forest floor. I hunted for mushrooms in the litter, but bad luck, everything was bone dry! The crumbling noise of dead leaves, the sweet music of the river, the song of chickadees and quacking geese was welcoming indeed. I was home. 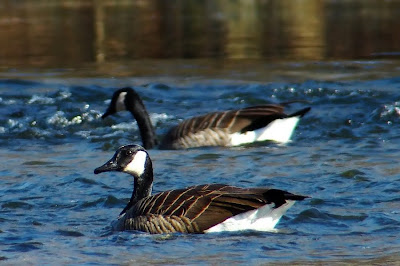 I went to the river first, following the quacking Canadian Geese as they swam by merrily, and watched me curiously. That was quite a sight, and I heard them all along the trail. Canadian goose is very common at the river, and a cluster of them is often seen flying during dusk. This goose is native to N. America, and breeds in Canada and northern US. 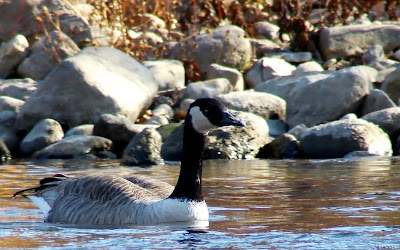 “By the early 20th century, over-hunting and loss of habitat in the late 1800s and early 1900s had resulted in a serious decline in the numbers of this bird in its native range.” Wikipedia
Ironically, today, the Canadian Geese population is considered as pests in some parts, for reasons such as their droppings and the bacteria in their droppings, noise and ‘confrontational’ behavior.
Canadian Geese Call can be heard HERE 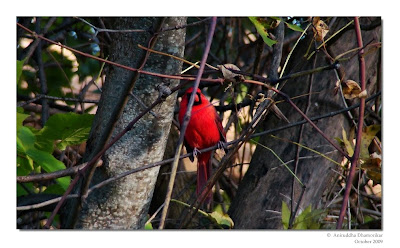 Northern Cardinal, male - image was taken in October'09
I walked upstream, and had a glimpse of a male Northern Cardinal, a beautiful brightly colored bird that is hard to go unnoticed. But like any other bird, one glance at this fellow and he is gone!

It has a fantastic call that can be heard HERE


As I strolled further, I spotted few Black Capped Chickadees on the canopy, flittering around from branch to branch and picking insects on the barks and in thickets. These birds are so quick that I haven’t had the opportunity to click any yet. It is a bird of the Tit family, and is a curious one. One of these did come down to see what I’m doing over there! This behavior is reported in rural or forested areas according to Wikipedia.

“During the fall migration and winter, chickadees often flock together. Many other species of birds, including titmice, nuthatches, and warblers can often be found foraging in these flocks. Mixed flocks stay together because the chickadees call out whenever they find a good source of food. This calling out forms cohesion for the group, allowing the other birds to find food more efficiently. When flocking, Black-capped Chickadees soon establish a rigid social hierarchy.” Wikipedia
To listen to its call go HERE 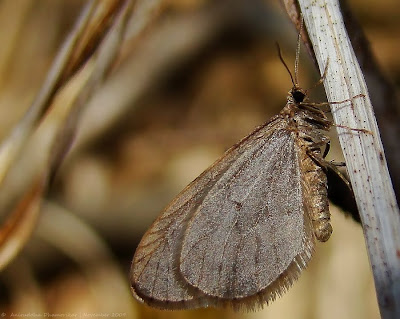 With all the birds busying themselves, keeping their distance from me, I was amazed to see a moth out of nowhere! It fluttered happily around the dried grass blades, and settled in a bush. What a sight, I told myself, how long had it been since I saw a butterfly, or even a moth for that matter? Three months to be exact. Three months is a long time, if you come from a tropical country and see no butterfly!

So I took some pictures, and passed it onto the Marvellous in Nature and Dave - helped me identify it.
The moth is Alsophila pometaria - the Fall Cankerworm Moth, a moth that goes on wing during fall until December. I saw several individuals fluttering in the warm sunlight, but only one offered a photograph.
“The fall (and spring) cankerworms defoliate a variety of hardwood species in the spring. Hosts include the red and white oak groups, maples, elms, hickories, ash, and cherry. Heavy defoliation usually occurs in May and June, and can cause growth loss, mast reduction, and, if coupled with other stresses, may result in mortality. Its greatest impact is often felt in high public use areas where defoliation reduces the aesthetic value, and larvae and their droppings create a nuisance.” Source - http://www.fs.fed.us/r8/foresthealth/idotis/insects/fallcank.html 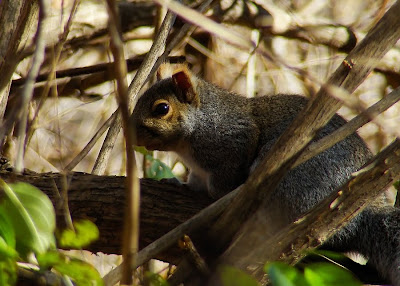 I thanked the moth and treaded on looking up and down, trying to find mushrooms and other creatures of the woods. And just so I glanced upon a scurrying Eastern Gray Squirrel, I’m sure she noticed me first, and went into hiding! I got a few shots from the thicket, and let her go on her way up the tree. 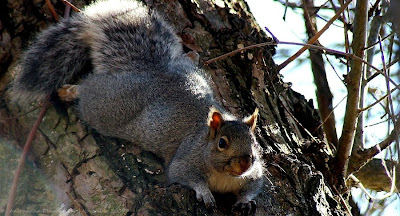 She went up, her eyes constantly spying on me, and lay flat on the bark, as if invisible – well camouflaged from me! Thence I saw many Eastern Gray Squirrels, including the melanistic form and enjoyed their constant chuckle. 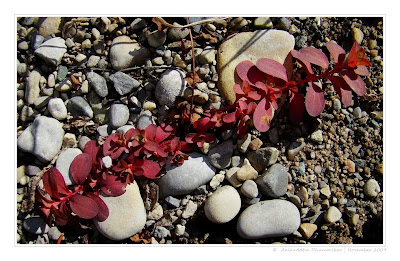 This herb caught my eye, and I am still in the process of identifying it. 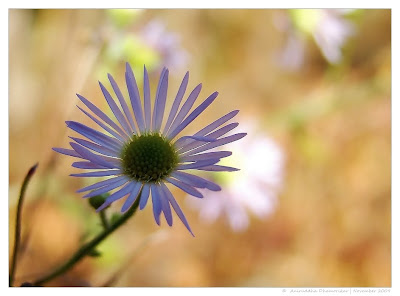 ...and this flower, belonging to Asteraceae, yet unidentified. 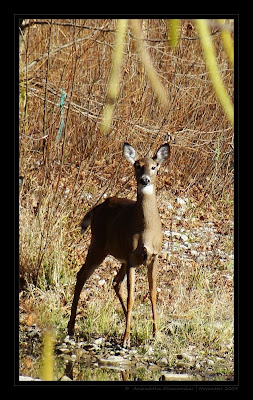 The grass and some shrubs were green by the lake, so I explored a few, and as I sat down to get some shots, suddenly a White-tailed Deer came from the woods and stood by the water, staring right at me. I was seen, again. I slowly mounted a tele-converter lens, and got into the position to shoot. Behind her came two more young deer – as alert as her. The doe sensed danger and stomped her feet to the ground – a behavior observed in most deer to set the alarm for danger.

“White-tailed deer are generalists and can adapt to a wide variety of habitats. The largest deer occur in the temperate regions of Canada and United States. Commercial exploitation, unregulated hunting and poor land-use practices, including deforestation severely depressed deer populations in much of their range. Conservation practices have proved so successful that, in parts of their range, the white-tailed deer populations currently far exceed their carrying capacity and the animal may be considered a nuisance.” Wikipedia 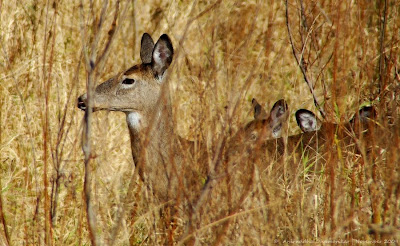 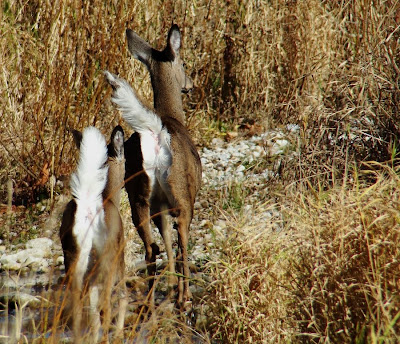 I bid them farewell, and wandered into the woods again, and heard something scurrying on the forest floor, another squirrel, I thought. So I watched curiously and saw a pair of Mourning Doves, well camouflaged on the ground. It is one of the most widespread birds in N. America. 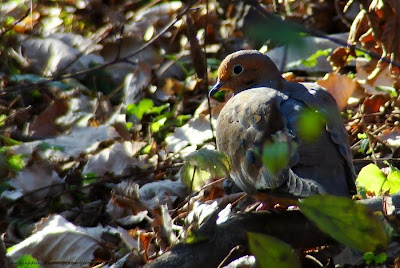 "It is the leading gamebird, with up to 70 million birds shot annually in the U.S., both for sport and for meat.” Wikipedia

It's Call can be heard HERE

I continued walking and until now, I had not come across any significant human impact on this ecosystem that stood on the brink of human encroachment. But I was wrong. A nigh fifty meters I walked, and came across a sight that is not uncommon. A pipeline draining all the wastes into the river! 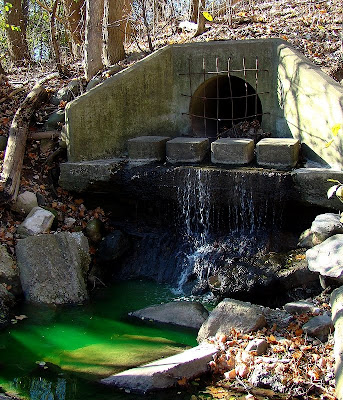 The water was fluorescent green in color, a color that symbolizes radiation! But the fishes in that water were abundant and no dead fishes floated above. Just a dye, perhaps but who in the world would discard dyed water into a beautiful river? The fact is that this is one of the many, many waste outlets going to one of the many, many rivers around the world. It is not shocking, it is plain stupid. So why crib about it? 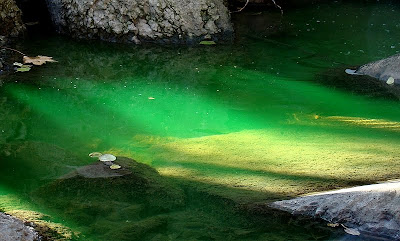 Well, let’s take a look at the river:

“The Thames River is one of the largest and most biologically diverse rivers in Ontario. The river is arguably the City of London’s most significant natural feature and an environmental asset. It flows through the centre of the city and is used by thousands of residents and tourists alike.”
Source - http://www.clear.london.ca/Thames_River.html

The river has seen its ups and downs with respect to Phosphorous levels, and so on. It has been clean for most of its life, and many programs have been implemented in conserving this river ecosystem. So when you see waste being discarded off into the river, one will naturally doubts its survival in long term.

The trail was pleasant and rewarding in many ways. Who said only greenery hides the real beauty? It’s everywhere, even in a dense dried, dusty thicket or a dried, cold riverbank!