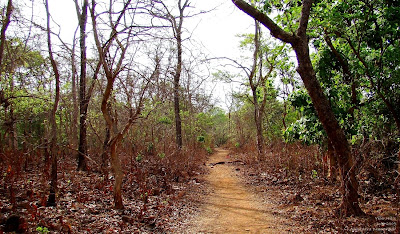 Yeoor Hills of Thane require no introduction - to see more on Yeoor, just google "Yeoor Hills" or go through my previous posts before September 2008 and wait for more in days to come. I went Yeoor after many months. Thus I "officially" declare the beginning of my favourite season of Monsoon! Officially I said, for it's about time for Monsoon to arrive Mumbai but is late! So the literal Monsoon Trail is delayed. None the less, Yeoor Hills is still full of surprises.

I went on a trail with my friends after a long time. The excitement of visiting Yeoor was high, and expectations were higher. It was a small trail and we had small amount of sightings, but it was a good day to put my camera to extreme level of macros.
Starting with Monsoon Trails 2009, I promised myself to pick up plastics that I find on the trails anywhere I go, and put 'em in my bag - or if a friend wants to share some garbage - his bag.
List of Sightings:
Birds:
1. Shikra - 2
2. Crested Serpent Eagle - 1 Call
3. Black Hooded Oriole - 1
4. Common Tailorbird - 1
5. Coppersmith Barbet - 1 Call
Insects:
1. Crematogaster sp.
2. Camponotus sp. (irritans)
3. Camponotus sp. (angusticollis)
4. Cerulean - laying eggs on Butea superba (Palash)
5. Spot Swordtail
6. Common Pierrot
7. Oecophylla sp. (smaragdina) - Weaver Ants
8. Scale Insects
9. Danaid Eggfly female
10. Golden Angle
11. Robber Fly
12. Harvester Ants Nest
13. Cicada - Plenty
Arachnida
1. Crab Spider - Female and Male
2. Ant-mimicking Spider
3. Scorpion UNID - caught by villagers, did not let us set 'em free.
Reptiles:
1. Forest Calotes - 5 Males
Photographs: 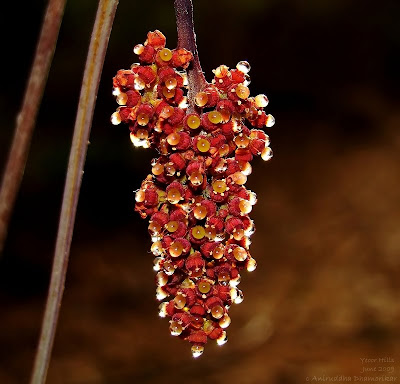 Wild Grapes - Ampelocissus latifolia: Inflorescence of this wild creeper common at Yeoor. There were several Scale Insects on this vine. These flowers were full of a liquid secretion, which was not seen on many other flowers. This secretion also did not tend to attract any insects. 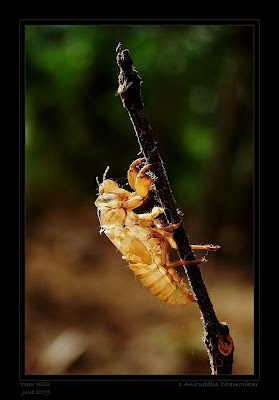 Cicada Nymph - moult: Adult Cicadas were plenty at Yeoor, with an occasional chirping that started with one Cicada followed by many others and fading slowly. 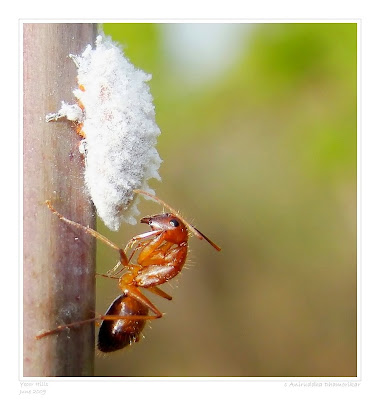 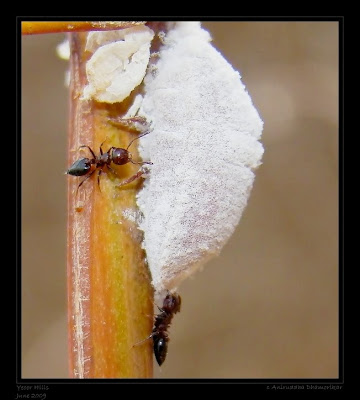 Crematogaster Ants: These ants were seen tending to another Mealy bug. 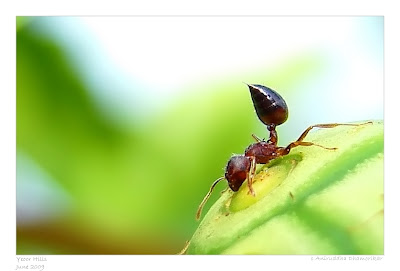 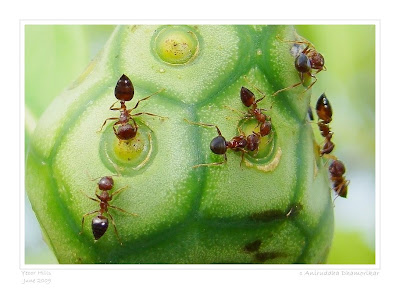 Crematogaster Ants: This is the fruit of Morinda, and the Crematogaster Ants feeding on its sap. They were present on every fruit. These ants were more commonly seen outside and far from their nest than inside (or around) their Pagoda Nests! 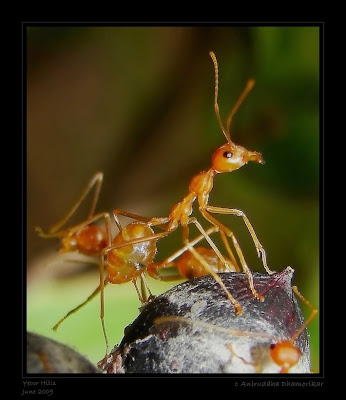 Weaver Ant - Oecophylla sp. (smaragdina?): One of the many individuals of the Weaver Ants in a defensive pose on their nest on Carissa carandas. 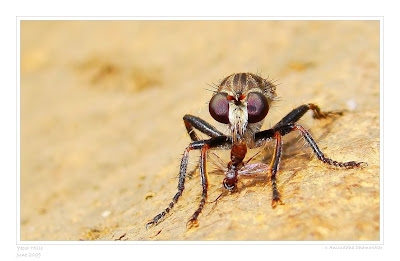 Robber Fly: A frontal shot of this Robber fly feeding on a winged ant. Robberflies pierce their prey with strong sword-like mandibles and inject digestive juices into the prey, which gets internally dissolved and the fly then sucks out the bodily juice out of its prey. 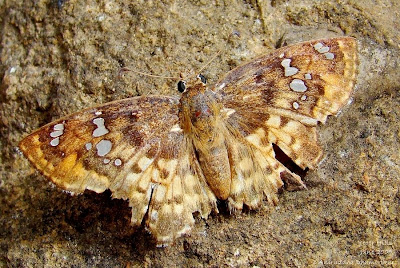 Golden Angle - Caprona ransonnetti: A hesperiid, this is a Dry Season Form. Only one individual was seen. I expect to see many during Monsoons. 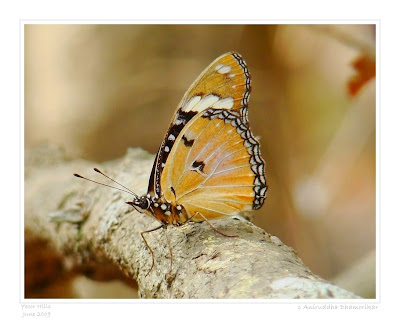 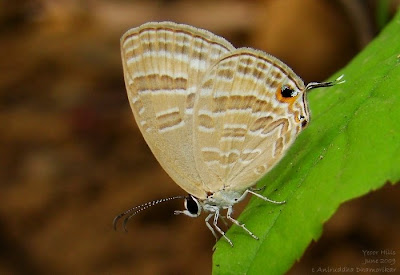 Common Cerulean - Jamides celeno: A single female was observed laying eggs on Butea superba. She laid about five eggs on the budding leaves. 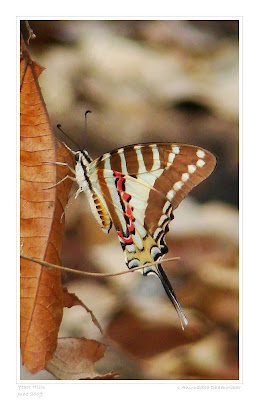 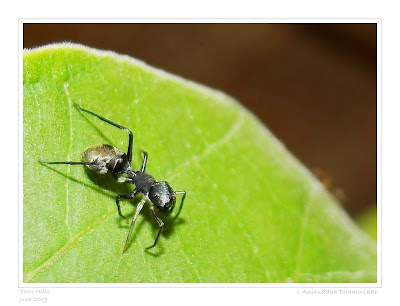 Ant-mimicking Spider: This spider mimics ants perfectly. I have no idea of the species, but this one belongs to Salticidae. A wonderful example of mimicry! The first pair of legs mimicked the antennae of the ants. The size was a little less than 10mm. 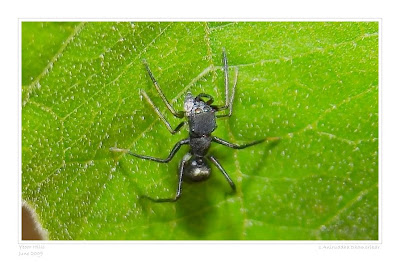 The above image is of the same spider, showing clearly the typical Salticidae Eye Pattern and four pairs of legs. 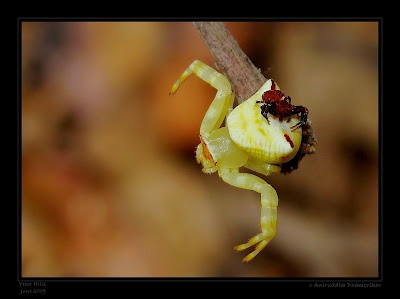 Crab Spider: This spider belongs to Thomisidae, the infamous Crab Spider known for its typical Crab-like-posture. This yellow bigger individual is actually a female, carrying a male on her back - rather abdomen. I wonder if these spiders show any Breeding Pattern, since I had seen a couple back in September 2008 too. 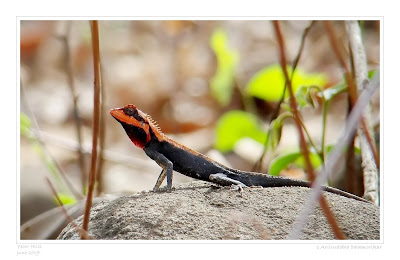 Forest Calotes - Calotes rouxi, Male: This is their breeding season. Many of these were seen, displaying their colours - either to the well-camouflaged females to attract them or to other males to warn them. 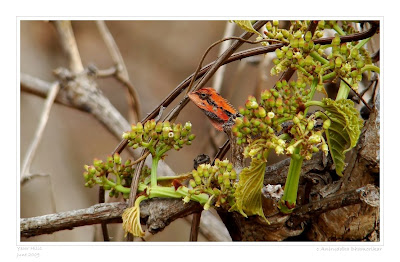 Another male Forest Calotes, hides from me in the buds.


That's the end of this short trail, although I got to learn a lot from what these forests show us.
aniruddha dhamorikar india SGNP thane Yeoor Hills